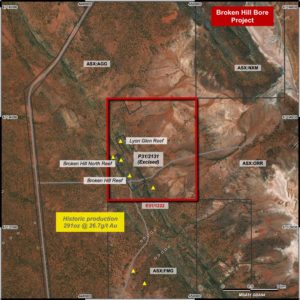 The Broken Hill Bore Project comprises exploration licence E31/1222 covering 2.6km2. The project is located approximately 160km northeast of Kalgoorlie within the Edjudina Domain of the Laverton Terrane in the Eastern Goldfields Province of the Yilgarn Craton, Western Australia.

Regionally the Edjudina Domain hosts a number of significant gold deposits such as Northern Star’s (ASX:NST) Carosue Dam Project, the Edjudina Gold Camp, 9km south of the project and the Patricia workings along strike. The Yarri and Porphyry Gold Camps are located in the Murrin Domain 18km to the west and the Deep South Deposits in the Linden Domain to the north east.

The historical Broken Hill workings are excised from the southeastern corner of the tenement, here gold mineralisation is associated with quartz veining and sheared dolerite-basalt schists. Government records indicate 291.5oz of gold have been produced from 4 historical Gold Mining Leases in this area (1902-04), at an average grade of 26g/t Au. On the Edjudina line of reef, to the east of Broken Hill, gold mineralisation is developed in quartz veining associated with the fold hinges of gently southeasterly plunging brecciated cherts and BIF’s.

WMG intends to focus on both styles of quartz veining, and potential mineralisation, and has planned a systematic exploration program across the tenement area consisting of a high-resolution ground magnetic survey to help produce a litho-structural interpretation, coupled with surface soil/auger geochemistry to generate target areas to be tested by initial aircore drilling.