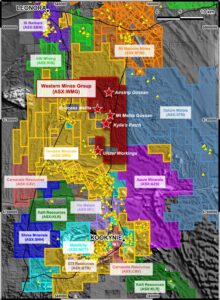 The Melita Project comprises exploration licence E40/379 covering an area of approximately 105km2. The project is located approximately 20km south-southeast of Leonora, in the Gindalbie and Menangina Domains of the Kurnalpi Terrane, in the Eastern Goldfields Province of the Yilgarn Craton, Western Australia.

The project lies on the major Norseman-Wiluna Greenstone Belt and in the vicinity of the project area the belt is a triangular shape, bounded to the west by the north-trending Mount George Shear Zone, the northwest-trending Keith-Kilkenny Shear Zone to the east and the Mulliberry Granitoid Complex to the south.

The Melita Project is located to the north of the historic Niagara, Kookynie and Orient Well-Butterfly gold mining centres, with past production estimated at over 600,000oz, and close to Genesis Minerals (ASX:GMD) 1.608Moz Ulysses Gold Project. The main deposit types for gold mineralisation are associated with pyritic quartz veins and pyrite-carbonate-silica-sericite wallrock alteration in differentiated mafic intrusive sequences; quartz veins hosted in granite and quartz vein stockwork hosted in a range of rock types.

Numerous small historical mine workings are recorded in the project area, with the Princess Melita gold workings located on the tenement boundary in the central section of the tenement.

WMG is excited by the under explored gold potential of the project, particularly given the historical workings noted through the project, and its location in the heart of the WA Goldfields. The Company has planned a systematic exploration program consisting of satellite based remote sensing and targeting, soil and auger geochemistry, ground magnetic surveys, followed by initial aircore drilling to test targets identified.