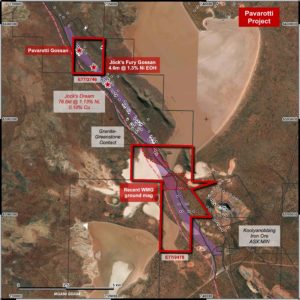 The project lies on the western side of the Koolyanobbing Greenstone Belt, a northwest trending sequence of mafic and ultramafic volcanic and intrusive rocks with lesser sediments intercalated with BIF horizons forming prominent ridges. The BIF horizons have been exploited since the 1960s, with several open pit iron ore mines that are currently owned by Mineral Resources (ASX:MIN). The greenstone belt is bounded to the east and west by monzogranite and granodiorite.

The western basal ultramafic sequence of the Koolyanobbing Greenstone Belt has been explored intermittently for nickel sulphide mineralisation since the 1970s, with nickel gossans and Kambalda-style channel hosted nickel sulphide mineralisation in komatiite ultramafic volcanics first identified by BHP. This work mostly focused on the Jocks Dream deposit located between WMG’s tenements E77/2478 and E77/2746, but also identified the Pavarotti and Jocks Fury Prospects within E77/2746. Delta Gold subsequently defined a resource of 78,600t at 1.13% Ni and 0.10% Cu at Jocks Dream in 1992 (not JORC compliant), based on the BHP drilling. 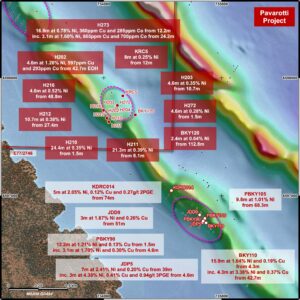 Based on a review of the historical exploration WMG considers the area around the Jocks Fury gossan, within tenement application E77/2746, highly prospective for Ni-Cu-Co-PGE mineralisation, yet this area has often been overlooked and under explored by previous work. A number of the historical BHP drill holes (mostly shallow vertical holes) contain encouraging intersections of Ni-Cu-Co-PGE mineralisation that have not been adequately tested at depth, including:

Upon grant of tenement E77/2746, WMG intends to conduct high-power ground based electromagnetic surveys over the Jocks Fury and Pavarotti prospects, similar to that currently being employed at Mulga Tank, in order to help define drill targets at depth below the historical shallow intersections of Ni-Cu-Co- PGE mineralisation within this tenement area. The targets identified through the exploration process will be drill tested.