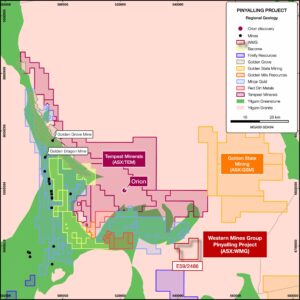 The project is lies at the south-eastern end of the Yalgoo-Singleton Greenstone Belt, within an area known as the Warriedar Fold Belt that comprises a folded sequence of gabbro and dolerite intercalated with basalt, ultramafics, sediments and BIF. The Warriedar Fold Belt hosts a number of historical gold workings at the Pinyalling Mining Centre, 3km north of the tenement area, as well as the Baron Rothschild prospect drilled by Thundelarra Exploration during the 1990s.

Limited previous exploration has been conducted within the area of E59/2486, but geological mapping, soil geochemistry and rock chip sampling suggests the tenement could contain previously unrecognised extensions of the Yalgoo-Singleton Greenstone Belt and Warriedar Fold Belt. The under explored nature of this area has been recently demonstrated by the nearby Orion discovery at Tempest Minerals (ASX:TEM) Meleya Project.

Upon grant of the tenement WMG intends to focus its exploration program on assessing the lithium and gold potential of the project through satellite based mapping, field ground-truthing and surface soil/auger geochemical sampling, followed by initial aircore drilling of any targets identified.