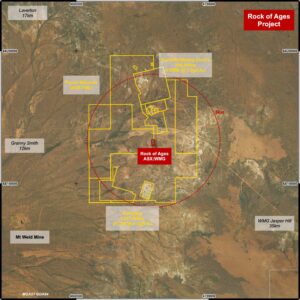 The Rock of Ages Project comprises prospecting licence P38/4203 covering 9.71ha. The project is located approximately 32km southeast of Laverton within the Merolia Domain of the Burtville Terrane in the Eastern Goldfields Province of the Yilgarn Craton, Western Australia.

The project lies on the Laverton Greenstone Belt, around 4.5km south of the historical Burtville Mining Centre and is surrounded by Focus Minerals (ASX:FML) Laverton Gold Project, with the neighbouring deposits of Burtville (206,000oz at 0.96g/t Au) and Karridale (1.19Moz at 1.33g/t Au) within a 5km radius. The tenement contains the Rock of Ages workings, a series of shallow mine workings over approximately 600m strike, where historical records indicate 2,074oz Au was mined between 1902 and 1911 at an average grade of 50g/t Au.

In September 2021, WMG completed an initial 5 hole RC drilling program totalling 654m designed to test beneath the main central cluster of shafts and workings and area of extensive mullock dumps (ASX, Completion of Rock of Ages RC Drilling, 9 September 2021). The holes ranged in depth from 120m to 150m depth targeting an inferred sub-vertical mineralised horizon dipping towards the west. The holes were drilled across 4 lines along the strike of the trend of shafts and workings. 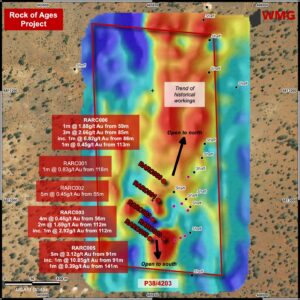 Assay results confirm the high-grade gold potential of the project, with up to 10.85g/t Au seen in hole RARC005, whilst perhaps more encouragingly the results also show evidence for up to 5 stacked gold lodes that appear to correlate well between drill holes. Generally better assay results were seen in fresher, less weathered rock versus the highly weathered upper saprolite. 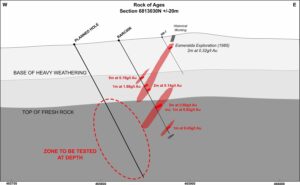