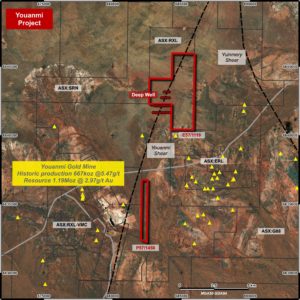 The Youanmi Project consists of exploration licence E57/1119 and prospecting licence P57/1450 covering 12km2. The project is located approximately 70km southwest of Sandstone, in the Southern Cross Domain of the Youanmi Terrane of the Yilgarn Craton, Western Australia.

The historical Youanmi Gold Mining Centre has produced over 600,000oz of gold since its discovery in the late 1800’s, with most production coming from the Youanmi open pit and underground mining operation. The area has seen a resurgence in exploration activity with the recent discovery of the high-grade Penny North (ASX:RMS) and Grace (ASX:RXL) deposits along the Youanmi Shear.

The Youanmi Project tenements are just 2km to 7km from the old Youanmi Mine. The gold lodes at Youanmi are hosted within NNW trending splays extending off the Youanmi Shear Zone, which run sub-parallel to the granite-greenstone contact. Mineralisation is localised along zones that vary from 1m to 20m width forming sericite-quartz mylonites with abundant pyrite, arsenopyrite, chlorite and carbonate alteration, whilst quartz vein stockworks are noted within the adjoining granite.

Little historic work has been conducted within the tenement areas, with E57/1119 in particular overlain by shallow cover. However, both tenements are associated with interesting N to NNW trending structural features in airborne magnetics, a possible splays from the main Youanmi Shear. Historic shallow vertical RAB drilling has identified minor anomalous gold-in-saprolite within E57/1119, along with more recent auger geochemistry.